All You Need To Know About Apostle Kwadwo Safo Kantanka

Apostle Dr Kwadwo Safo Kantanka was born at Bekwai in the Ashanti Region of Ghana on August 26, 1948. After his primary and secondary school education, he attended Ghana Technical Works in Kumasi. He proceeded to work as a welder at the Volta Aluminum Company (VALCO) for three years.

He is a preacher, inventor, innovator, Physicist, Chemist, Biologist, agriculturalist, philanthropist and the Star of Africa.

Safo Kantanka  is one of  the world’s greatest multi-dimensional scientist and technologist of all times and has carried out the greatest philanthropic activity in Ghana.

He funds all these exercises with revenue from his numerous investments.

He is also the founder of the Kristo Asafo church, Great KOSA network of companies and many other institutions.

Apostle Dr Kwadwo Safo Kantanka was born on 26th August 1948 at Bekwai in the Ashanti Region of Ghana.

As a child, he had deep passion for science and technology. After closing from school, he would quickly do his home work and rush to the farm to get sticks for designing cars, helicopters, planes, etc.

He designed machines and automobiles that had never been seen in the town.
The level of wisdom displayed by the young Kwadwo Safo Kantanka through his speech and handicrafts astonished lots of people.

This earned him great respect from the community including the youth and the elderly.

Apart from his deep interest in studying nature, he loved sports. He was a very good footballer, musician and dancer.

It is therefore not surprising that he started manufacturing musical instruments at the early part of his life.

After basic school, he attended the Ghana Technical Works Institute in Kumasi. He thereafter had a three-year stint as a welder at the Volta Aluminum Company (VALCO).

The Founding of Kristo Asafo

On the 3rd of February 1971, he founded his church, Kristo Asafo (Christ Reformed Church).

Many were amazed to see a man of God roaming through towns and villages with soap on his head and advertising with his mouth to attract customers.

This made some people to question his legitimacy of being a man of God but Apostle Safo Kantanka was not bordered about this.

He knew he was a great man and had a special mission to accomplish on earth but it was just a matter of time.

He also embarked on selling cooking oil and foodstuff, farming, fishing and many other trades and entrepreneurial ventures.

He did all these alongside the preaching of the gospel.

From this humble beginning, it appeared to lots of people as a shock when they saw him donating the little he had to the poor and needy in society.

He also manually dug wells for villages and communities to aid them obtain good drinking water. All these were done wholeheartedly and free of charge.

In 1980, Apostle Kwadwo Safo Kantanka began organising annual charity shows where lots of food stuff from his farms, clothing and other items were distributed to the poor and needed in society.

He also exhibited some of his inventions and innovations on such shows. In the year 2013 he organised the 33rd annual edition of the said show.

Apostle Dr Safo Kantanka and the Kristo Asafo are famous for philanthropy and service to the needy in society.

The Kristo Asafo (Christ reformed Church), apart from its believe in the trinity, also believe that the infinite intelligence that God has given to mankind is not limited to one race and that by hard work and perseverance through science and technology as demonstrated by its visionary leader, Apostle Dr. Kwadwo Safo Kantanka, Africa will be redeemed.

Apostle Dr. Kwadwo Safo Kantanka is a special Man of God. He preaches the gospel and performs miracles within and outside the congregation of his church.

From healing the sick; raising the dead; commanding the ground to split open for water and Tilapia to emerge and form a fish pond (at Adansie in Ashanti Region) and many other wonders beyond the scope of this text, he reminds people that “miracle is not my mission on earth”.

Apostle Dr. Kwadwo Safo Kantanka is a man of few words and an optimist. As industrious and business minded as he is, he has invested in many businesses including the following:

Great KOSA Company Limited: This is a conglomerate involved in inventions, innovations and other activities.

It has various divisions and sub-divisions such as the Foundry and Pattern Development division, Plant Medicine division, Building and Construction division, Mechanical and Automobile division, Radio and Transmission division, Electricals and electronics division etc.

Apostle Kwadwo Safo Kantanka is the founder of Great Kosa Company, a popular car manufacturing company. The company began mass production of the vehicles in Ghana in early 2015 after Ghana’s Driver and Vehicle Licensing Authority (DVLA) gave them the green light.

He was the first African to manufacture heavy-duty machines, vehicles, engines, and aircraft manually. The super-talented artisan was also the first person in West Africa to build electric cars.

His philanthropic activities have earned him numerous awards and certifications, including two doctorate honours, an Engineering honour and a recent one which is a Professor Emeritus conferred on him by the Alfred Nobel University from Ukraine. 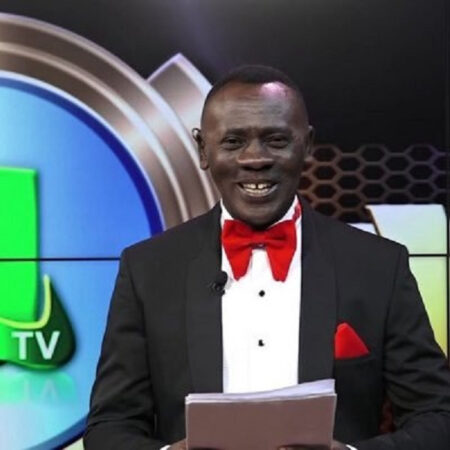